It's been over eighteen months since I visited the Isle of Skye and took this image of the Cuillins from Elgol. However, having scanned it using my Epson V700 scanner, I was always aware that I could glean just that little bit more information from the transparency using a drum scanner. In particular the left rock jutting into the sea, which simply blocked up in the shadows. 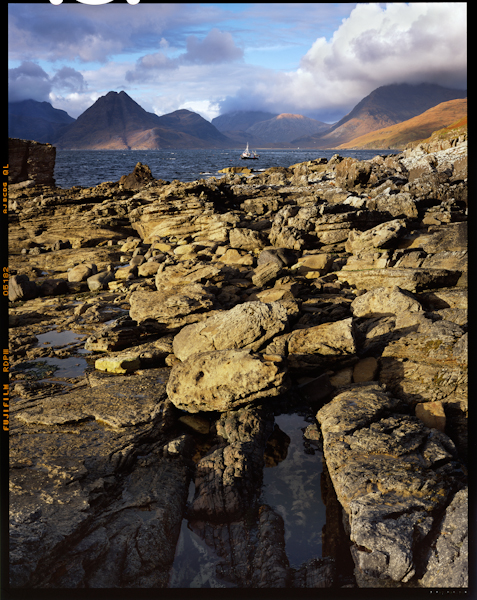 I decided to call in to see Tim Parkin, the font of all knowledge with these things, who kindly drum scanned the transparency (along with a few others), so that I could get the very best out of the image. What I hadn't realised is that he is able to scan right to the edge of the transparency including the film name and black border of the transparency itself. I'd seen this done by a few photographers in the past and always thought they look really good left on the image. Therefore, I too decided to leave the border on too (although anyone wishing to purchase this image can request it with or without).

When on Skye I remember spending the whole day in Elgol on what proved to be a dreary grey day overall. Therefore, I spent much of my time looking for small cameos. Whilst doing so I came across images of larger vistas that had potential if the weather became more favourable. My problem was that I only had one day left before leaving Skye and as the following day's forecast was also going to much of the same, I resigned myself to the fact I might not be able to manage it on this occasion.

The next day John, Ann and myself decided to visit the Isle of Raasay just off Skye and only a twenty five minute ferry crossing. As predicted the weather was grey and cold. We did manage to spend  some time studying a family of otters on the water's edge which was just magical. We then made our way down 'Calums Road' to see where it led us. As it happened, it was quite spectacular, particularly as we came across two golden eagles soaring above our heads.

It was on only on our way back on the ferry did we notice gaps appearing in the cloud revealing the first sunshine all day. We decided there and then we would call back at the cottage, grab our camera gear and make a last ditch attempt at Elgol. I only had an hour or so to make the journey back to Elgol, set up and try to make the image I had in my minds eye.

After parking up at the bottom of the steep bank in Elgol, I made a bee-line to the spot at break neck speed (and with a two stone back pack that's no mean feat!). My lungs felt like they were ready to burst but there was no time to hang around. I set up the Ebony camera with the 150mm lens, tilt focused to make sure everything from the foreground (which is very close) to the distant Cuillins were tack sharp, placed a Lee 2 stop Grad in the holder then took a meter reading or two. At this point I was ready trip the shutter when I noticed that a fishing boat had made its way into the image. Now, normally I would have been shouting a lot of expletives at this point but I remembered an image I made in Sandsend a couple of years earlier where a fishing boat came into my field of view then. An image that was all the better for it quite frankly. So I waited a small while for the boat to get into the best spot before finally firing the shutter - How happy was I ?!!