A few blogs back I promised to update you on my findings so far with using my new Nikon D800E. Since then I've had many requests and questions from fellow photographers asking questions about the D800E and in particular what I thought about my lens choices. Therefore, this blog (and next week's) addresses my reasonings for purchasing the lenses I did, my findings so far (now the honeymoon period is over) and my likes and dislikes compared to using a Large Format view camera.

Before I proceed further I would like to add that I haven't ditched film altogether and have kept one of the two Ebony View Cameras I owned as I still enjoy the experience of using these cameras out in the field. Indeed, my intention is to experiment with other film cameras too in due course - in particular pinhole cameras and possibly medium format cameras.

When I placed my order with Robert White Photographic in the UK I was very nervous about my choice of lenses. Mainly due to the fact that the camera was so new there weren't many reviews and tests available at the time to make a really informed choice about compatibility. As I was planning on spending in excess of £7,000 this was worrying to say the least!

This purchase was always intended to replace my large format camera for the majority of my landscape work (due to the demise of Quickload film) therefore I wanted to purchase the equivalent focal lengths in lenses as I use for my large format work. So I initially asked Robert White (who are always very helpful) to reserve all three of Nikon's Tilt shift lenses whilst waiting for the D800E - namely the 24mm, 45mm & 85mm, so that I could still use tilt focus or rise and fall. That is until I read this article from Australian Light Website about the 24mm lens. I contacted Russell at Australian light who was very helpful and pointed out that the problem only applied to the 24mm and that it didn't appear to be an issue with the 45mm - therefore I decided to stick with the purchase of the Nikon 45mm Tilt Shift lens but reassess my wide lens option.

After reading that article I spent quite a bit of time researching a suitable alternative to the 24mm tilt shift when I stumbled across this small Youtube Video via Robert White's website. Jon explains about the quality of the Zeiss 50mm lens and pretty much goes on to say that all Zeiss lenses are worth investigating. My primary concern here was that I really, really had my heart set on a wide tilt/shift lens so that I could use it for extreme depth of field. Jon allayed those fears somewhat by telling me how good the depth of field is on the 25mm. I have to say I was a little sceptical but I had no reason to be as you will find later.

So far then I had decided on the 25mm Zeiss & 45mm Nikon Tilt Shift lens - so far so good. However, my final decision actually became the hardest of them all and that was whether I should still opt for the longer 85mm Tilt Shift Nikon lens. From experience my use of longer lenses on my large format camera were, let's say, infrequent. I would use my 210mm lens a little more but my 300mm came out only occasionally and even then, looking back over the images I'd made with it, I obviously hadn't needed to use tilt or shift.

At the same time, quite a few photographers I talked to enthused about the quality of Nikon's 70-200mm zoom lens. Now, I have to admit that I'm a big fan of prime lenses and the thought of buying a zoom lens seemed to me a retrograde step. However, after long deliberation I felt that I would get more use from the 70-200mm due to its flexibility at different focal ranges.

So there we have it, my final choices and the reasons for purchasing the lenses I did. So what next?

Well, the first thing I did was to test all the lenses for their aperture sweet-spots using my garage wall as the object plane and placing the camera around 2.5m away. For those interested these were my findings (to the nearest whole f number):

I hope this is useful information for you. It's not scientific by any means but I always find it useful to know which aperture approximately offers the sharpest image.

Living with my lens choices

Now that I have spent a little time with my equipment out in the field I think I can honestly say that I'm really pleased with my choice of lenses. They appear to cover all my requirements so far and in fact surpass my expectations when it comes to quality - which is a good thing I guess considering the not inconsiderable outlay.

Here is my synopsis of the 25mm Zeiss (next week I will give a synopsis on the other two lenses so stay tuned).

Zeiss 25mm ZF.2 f2 - By far my favourite lens due to its quality feel and film-like image quality through the viewfinder ( I shall expand on that a little later). I particularly like the fact that it appears sharpest at f11 - my most used aperture. The fact that f16 appears almost as sharp was an even bigger surprise to me as I'm able to create a greater depth of field.

Take a look at this image of Saltwick Bay, North Yorkshire for instance. Here, I was looking to make sure everything from the closest rock to Saltwick Nab in the distance was as sharp as possible. As can be seen, by using the depth of field scale on the Zeiss lens itself I was able to make sure maximum detail was available in the foreground whilst maintaining a good amount of sharpness on Saltwick Nab in the distance. No sharpening has been applied to these images by the way and the clarity obviously looks far more impressive on my screen than these slightly compressed jpegs (so you'll have to take my word for it ;) 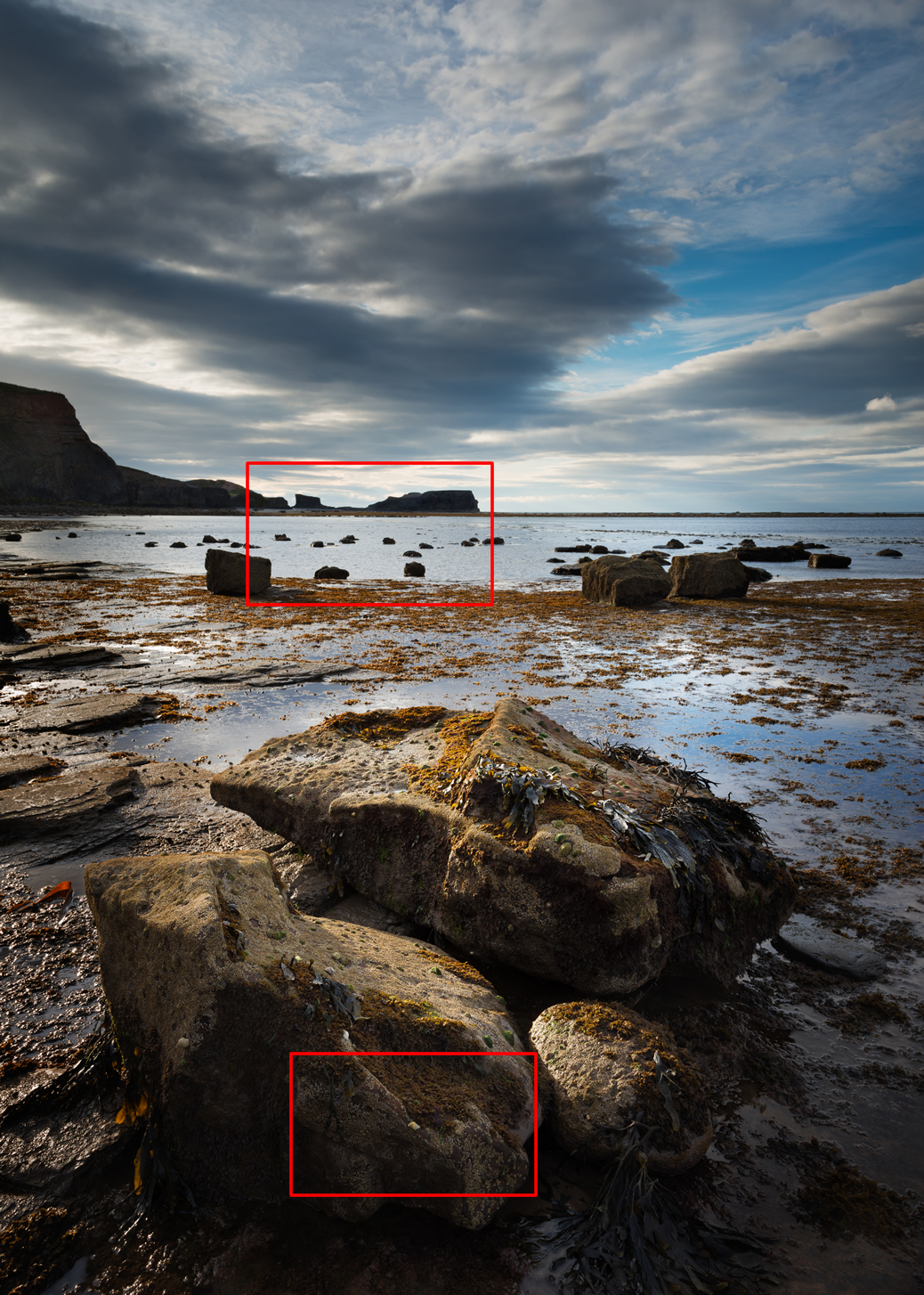 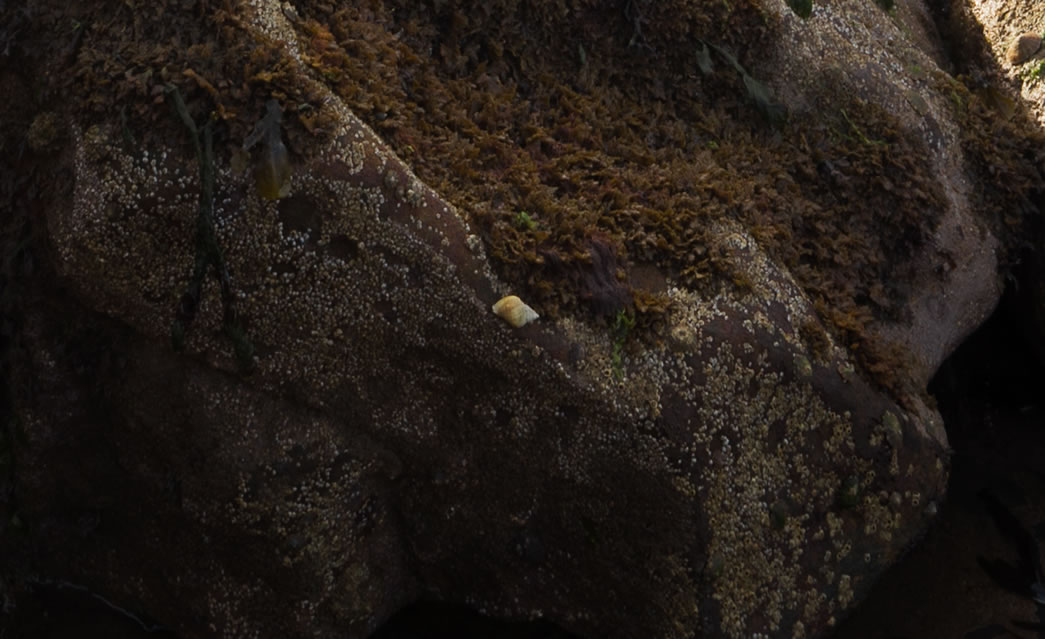 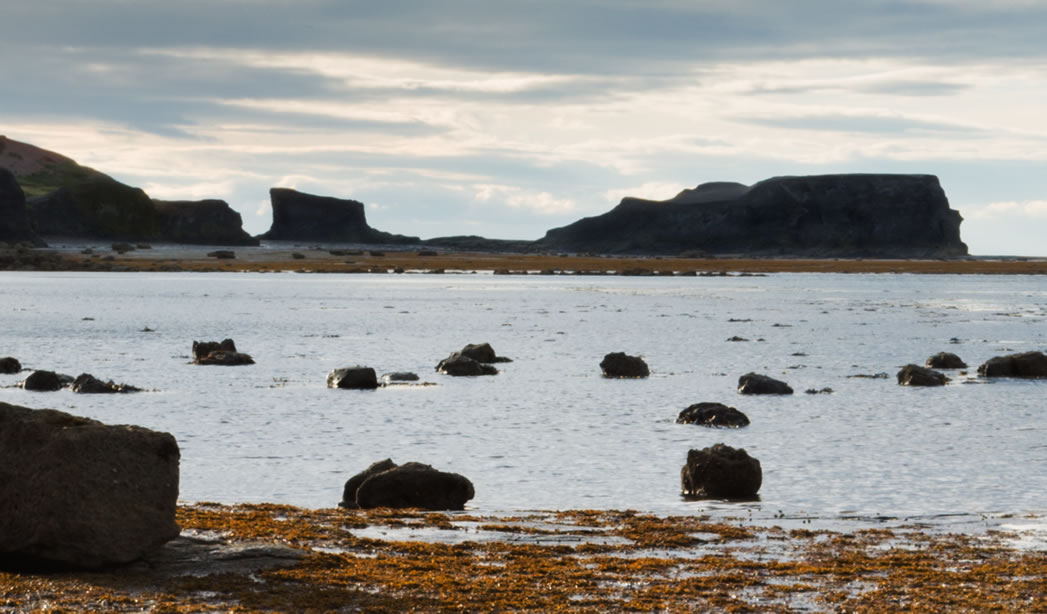 As I've been used to using tilt focus on my large format camera I was very pleased about the above outcome.

I cannot put my finger on it and it doesn't appear in Live View or in Raw on my computer but the image through the viewfinder of the D800E looks film-like when using the Zeiss. This helps me tremendously as I can envisage the image after it has been subjected to post-processing.

To demonstrate what I mean using the same Saltwick Bay image, below is the original unprocessed raw image. This is what I see of course on my computer screen but also in Live View on the back of the screen of the Nikon. However, when I look through the viewfinder I see an image pretty much how I've rendered the image in post-production like you can see in the bottom-most image. This isn't a one-off - I notice it every time I look through the viewfinder.

Now I'm no scientist so I'm not sure what is causing this but I do know that it's great when composing the image as I get a real feel of whether the image works or doesn't before taking the picture. 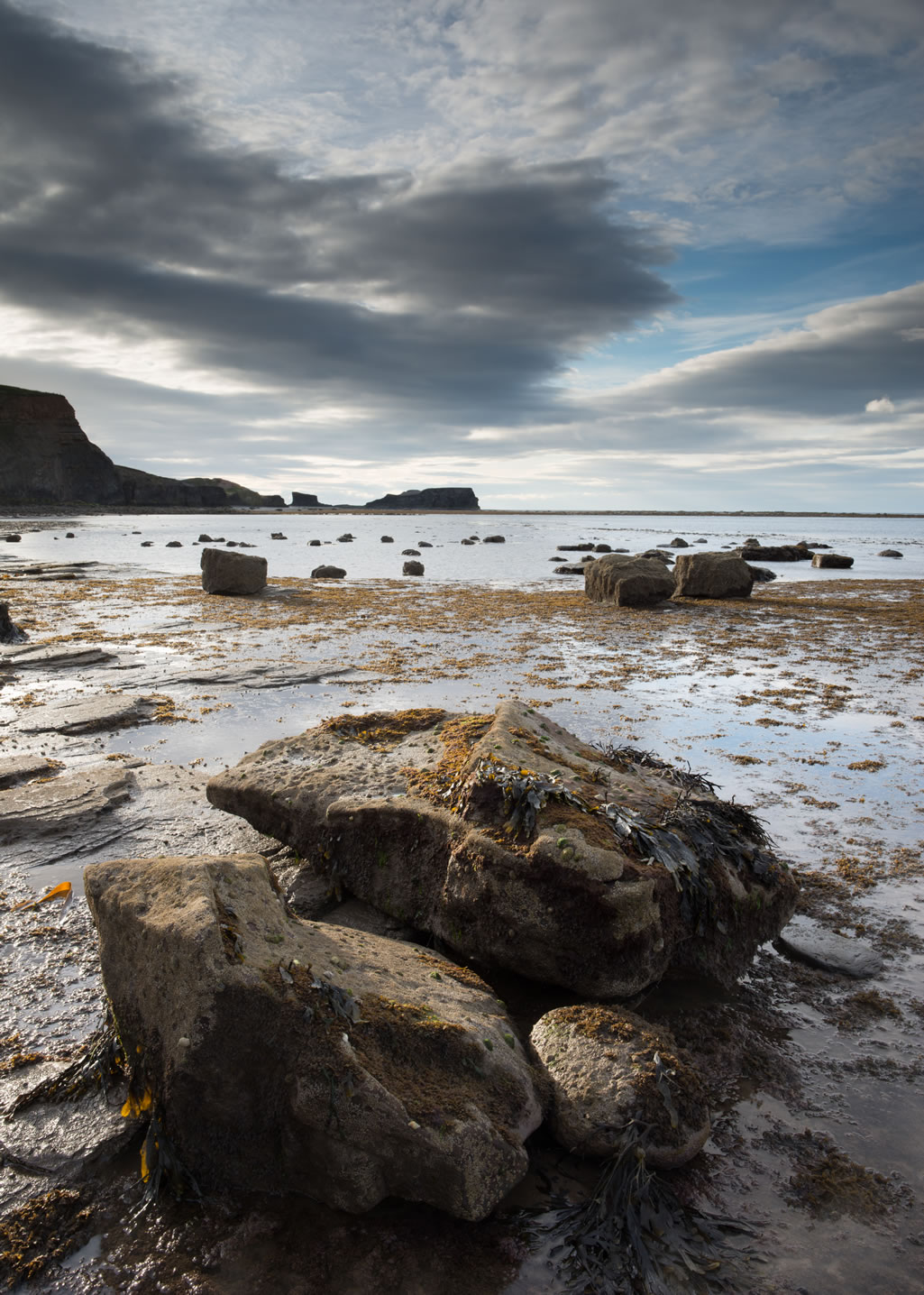 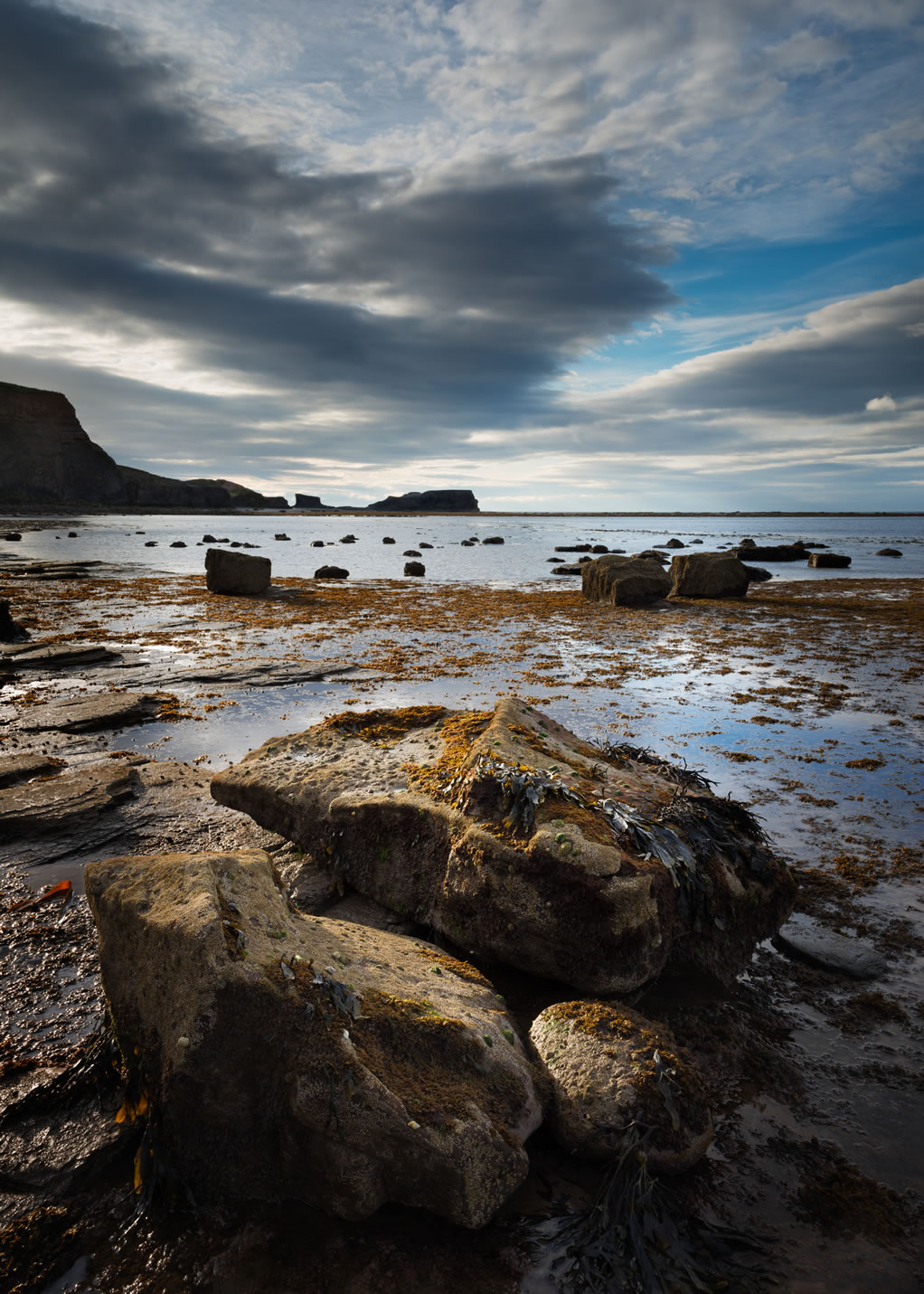 I'm pleased to say that I really haven't any dislikes about this lens. Yes, it does suffer from a little barrel distortion and vignette but as it appears in Lightroom 4's lens correction list this is corrected by a tick of a box.

If I was to be really picky I would say that if I were using the lens at wider apertures, sharpness appears to significantly fall away and, compared to f11, f4 looks quite soft (at least at 100% in Photoshop). Therefore, if you would be using this lens at the wider end of the aperture my advice would be to compare it with other lenses first. Overall though, for landscape photography, I give it a big thumbs up!

Next week I shall continue this blog with my synopsis on the Nikon 45mm Tilt/Shift and Nikon 70-200mm Zoom lenses along with a comparison with using a Large Format view camera.