Out of the dark

Out of the dark was made in late November last year when I had a rare afternoon to myself. Unless it's snowing, misty or there's hoar-frost about I find a lot of the Yorkshire dales looks forlorn this time of the year. This generally leads me to look for close-ups around rivers and streams or consider black and white images. However, I decided instead

to have a look around Ribblesdale as the limestone pavements in the area offer a lovely contrast to the undulating pastureland of nearby farms. 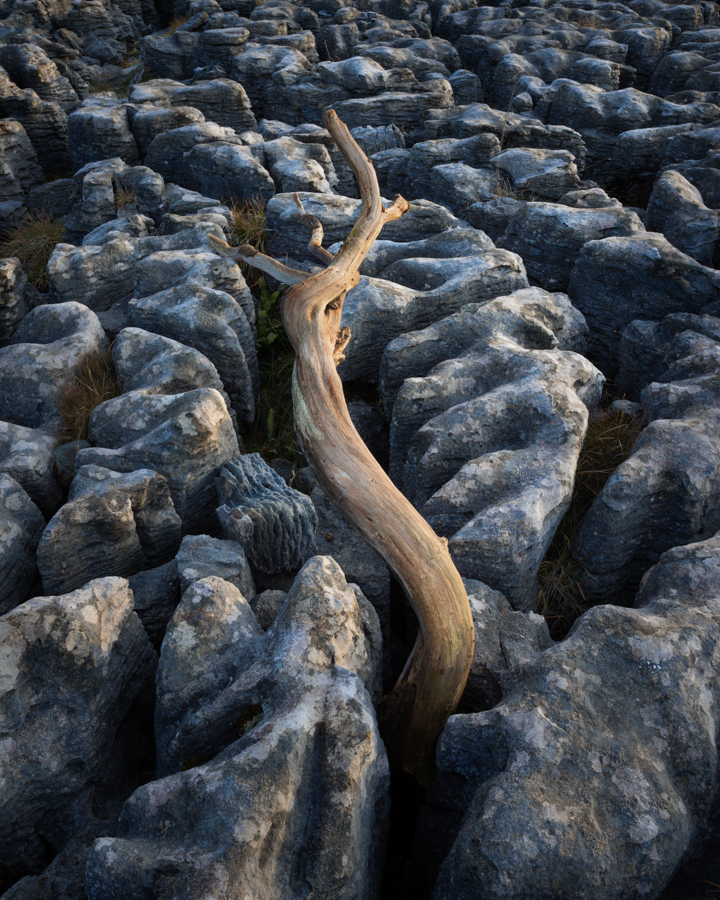 I spent most of the afternoon combing this particular area for the bigger vista but to be honest the lack of clouds in the sky would make for a rather bland image anyway I thought. At least that's my excuse as I feel my photography is leaning more to the abstract and 'innerscape' theme these days.  I then came across today's image of a large broken branch which appeared to look as if it had grown out of the dark.

As soon as I saw it I knew it was right. I love the contrast of colours and texture between the hard blue limestone and warm brown hues of the branch.

I needed some height for this image to make sure that any nearby trees and grass were excluded from the image. I'm fortunate to use an extra long Gitzo tripod - very useful for this work as it's inevitable that one of the legs has to extend down a gryke.

I have to be honest that I thought I would need to use my Nikon 45mm tilt-shift for this image but as it happened I needed to use my Zeiss 25mm. Using the DOF markings on the barrel, I worked out that f/16 was required to make sure that not only was the branch in focus but the waning background of limestone was too - important in an image like this (and yes, a tilt-shift lens would have helped here I have to concede)!

At this point the sun was very low in the sky which helped warm up the branch and cool down the surrounding limestone. I'm so impressed with the image I've already printed it at 21" on fine art paper and is proudly hanging in my house.

As usual this image and more can be seen in the Abstract area of the gallery.