Unusually for January, the first week of this year has been very mild and calm. I made a last minute decision to head out to the coast just south of Sunderland as my good friend and fellow photographer, John Harbron told me about this area being full of promise. I've visited most of the north east coastline at one point or another but this area was one I hadn't explored at all. 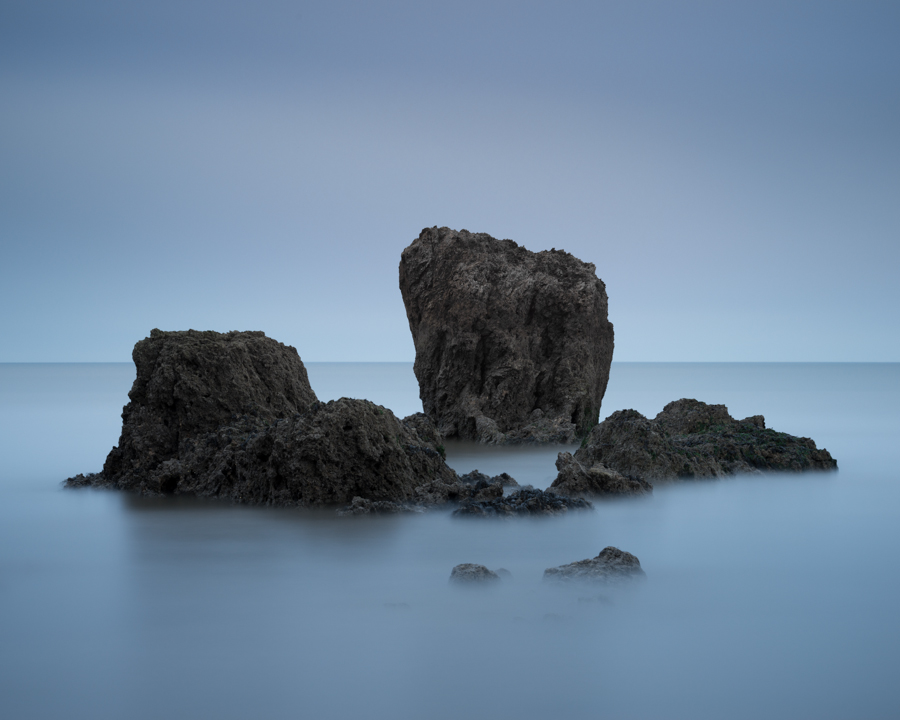 It was a rather quiet, mild and overcast day to be honest and I arrived thinking I would treat the day as a day for seeking out future opportunities than making an image. This might sound negative to some but I adopt this approach pretty much every time I head out. This way I'm never disappointed if I return without making a single image. I guess I learned this from when I solely used my large format equipment.

This stretch of coastline is well documented for its proud industrial heritage and remnants of this can be found up and down this stretch of coast. Due to the conditions I was mainly looking with an eye to making a black and white photograph and ideally use a relic of some sort from a bygone era as a point of interest.

It usually takes me a good while to get into the 'zone' when I arrive at a location. I consciously try to forget about anything else I might be thinking and focus specifically on the task in hand. Finding ideas can take a while, particularly in unexplored territory. Trudging along a shale beach also makes for slow progress but I had my eye on a rocky outcrop which I'd spotted from a distance. By now though it was starting to get dark and my tide table was telling me the tide was coming in.

I had to hurry, yet the shale prevented me from doing so. I finally arrived at the area and, putting my gear down and unpacking my Linhof viewer, I took my time to find an image I thought would work. getting to this destination meant traversing round a small headland which isn't a good idea when the tide's coming in. Therefore, I had to work quickly yet methodically so that no compromises were made to the final image. I know from my early days that rushing to make an image ultimately ends up with a step being forgotten and thus all that hard work and effort is wasted.

For this reason a few years ago I came up with an acronym I use for such occasions so that I never forget a crucial step (sorry, but you'll have to attend one of my workshops before I tell you but it works perfectly every time ;)

I knew a long exposure would be required to make the most of this image. I chose to cut the rocks off from any other part of the scene so that it looked freeform and independent - almost floating and iceberg like. To do this I needed to use the 70-200mm lens. I also wanted the sky to be almost the same EV as the sea for balance, therefore I fitted a Lee 2 stop graduated filter down to the horizon.

Also fitting an ND filter and taking a test image of 1½ minutes told me that I needed to make a much longer exposure to give the sea a smoother finish. As the tide was really starting to make its way in I knew I only had one last attempt at getting this image in the bag. It was time for the Lee big stopper - a superb ND filter that reduces EV by approx 10 stops.

Setting the Nikon to bulb and locking the remote release I simply had to wait 7 minutes before I could make my escape - a nervous time! Those that have made long exposures will know you have to wait another 7 minutes for the camera to process the image if you have long exposure noise reduction turned on (which I always do). There was no way I could hang around for another 7 minutes so after the initial exposure I packed away my gear making sure not to turn off the camera and without seeing the final image.

It was only on my return home (yes, I made it!), that I viewed the image on screen for the first time. With only the need to reduce the blue hue in Lightroom (a phenomena of using a 10 stop filter), I ended up with today's image which I've decided to name 'Tranquility'. Bizzarre, considering the frenetic circumstances it was taken in!