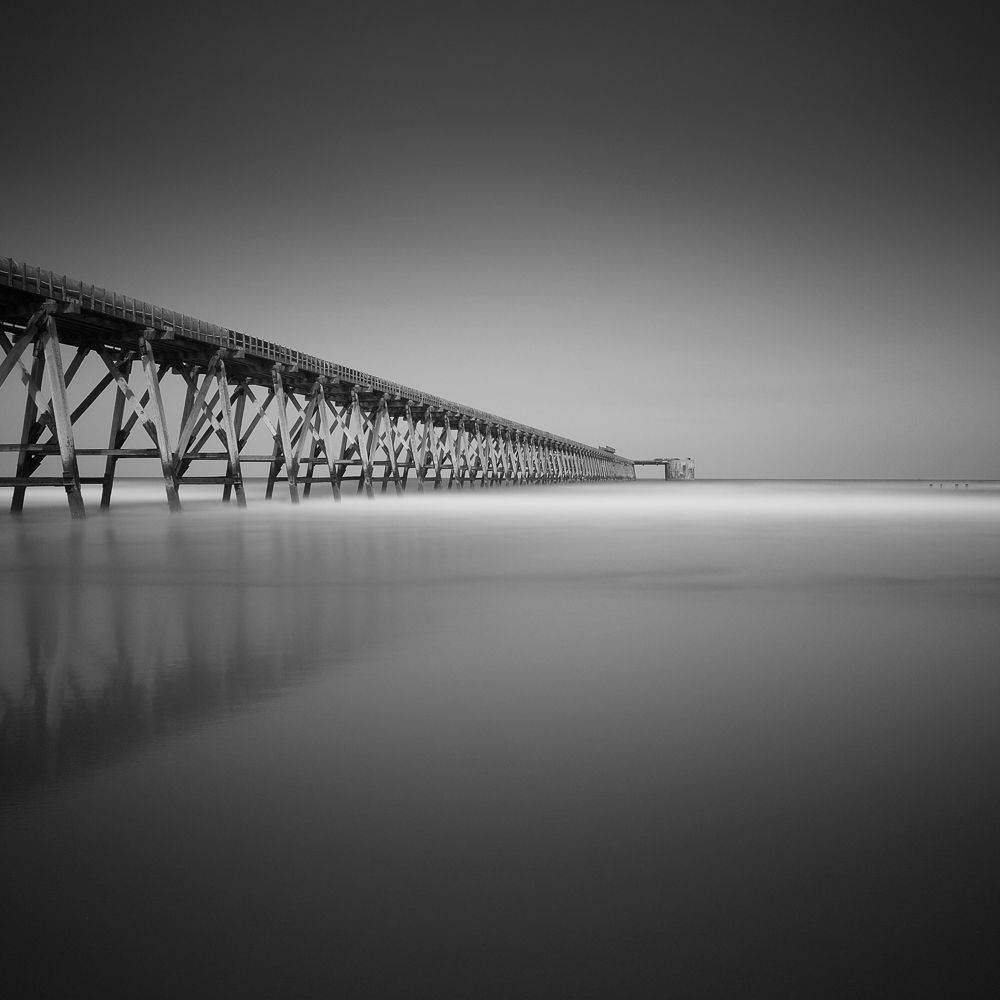 This week I was asked by Sophie from Wex Photographic if I would be prepared to write a piece about an image I submitted to #WexMondays, a weekly twitter competition that invites photographers to submit images they've made over the previous week, which I have started doing just recently as I think it's a great way to share images and also to see what other photographers are getting up to.

Of course I was happy to oblige and so armed with Sophie's brief here's how I approached making my black and white image, Old Pier (or Outstretched - the name I finally decided on before publishing it on my website's gallery page). 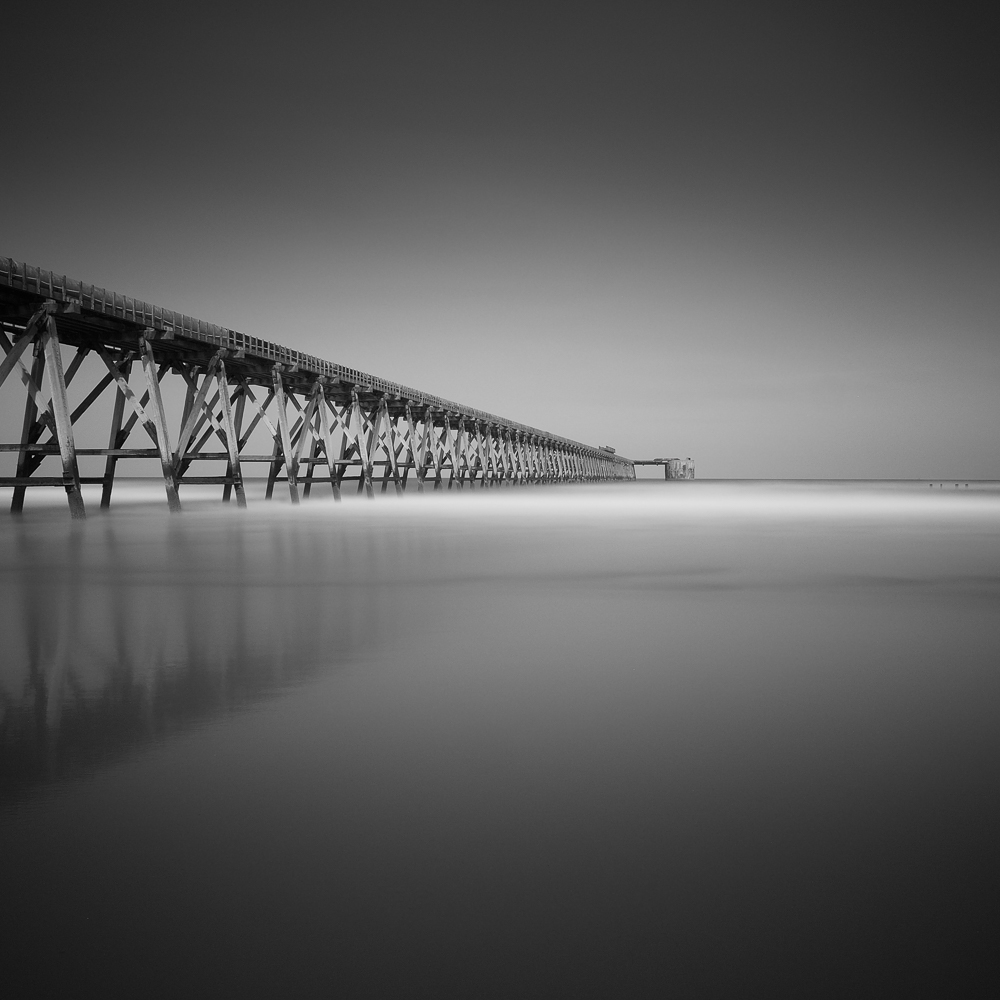 Where was the shot taken?

The pier is located along the coastline near Hartlepool, in the North East of England. I found it a few years ago by looking at Google earth, which is a great tool for finding architecture like this along the coast.

The pier is an old, dissused wooden affair that was once used to pump sea-water to an on-shore plant, which through a chemical process produced magnesium powder, which in turn produced magnesium metal. The plant was built around 1939 and closed as recently as 2005, which is why the pier is still in relatively good shape (although for safety reasons, a section on the shore has been dismantled so that people cannot walk along its length). As it perishes over the years however, this is going to be an even better place to visit photographically I think.

Why did I choose the shot in particular for WexMondays?

Having visited this location many times previously, I knew what type of image I wanted to make. I knew it was going to end up being a black & white long-exposure image as this is what I set out to do. However, it was only when I returned and loaded it onto my computer that I thought it was good enough to submit to WexMondays.

What special lenses/filters/angles were used?

Although my main camera is the Sony Alpha A7r, I tend to use my Olympus OMD-EM5 for this type of work as it has a great feature called 'Live Time', which produces images on the LCD screen at set points throughout the exposure duration so that you can see when the image is perfectly exposed. Also, unlike the Sony, it has the ability to alter the format to square, which is my preferred choice when making black and white images. The lens I used was the Olympus 12-50mm kit lens, which is a great little lens.

In order for this kind of image to be effective it's important to simplify the scene by smoothing out the waves and sea so that the main component in the image (in this case, the pier) takes centre stage. If I had simply taken the image without slowing down the exposure time, the sea and waves would have created and unwanted extra texture, which would have been a distraction from the architecture of the pier. It was also important to make sure that the foreground was wet and not dry as this too would have caused an added complexity to the image, therefore I had to wade in through shallow waves and set up so that I was ready to make the image as the sea receeded to low tide (As the day was sunny, this also helped lift the image by producing a small reflection of the pier in the sand).

As it was the middle of the afternoon (a great time for black and white photography by the way), I had to use both my Lee Big and Little Stoppers, which equates to 16 stops, to slow down the exposure time enough to give me the look I wanted. In this case the expoure time was exactly 4½ minutes. Unfortunately, this did mean that I didn't have any further spaces on the Lee Filter holder to fit a graduated filter onto the front to hold back the brightness of the sky in order to balance the foreground and sky. Therefore, my only option was to hold the filter with my hands in front of the holder for the duration, but it was worth it.

As with most landscape photographs, the most important part was knowing which angle to take the image from. In this case it was particularly important because getting too close to the pier would have allowed it to dominate the picture whereas going too far away would have lost its sense of scale. This composition ticks all the right boxes, allowing the viewer to understand the vast scale of the pier, whilst allowing it the space needed to sit comfortably within the image and not jar in any way.

How would you rate the shot in terms of technical difficulty on a scale of 1 to 10?

Quite often the most simple compositions are the most difficult to achieve. In this case a number of factors had to work together for it to be a success. As already mentioned it was important to understand the correct angle and distance to take the image from. It was also important to slow the image down enough to simplify the scene plus the neccesity of using a graduated filter on the sky. But most of all it's the process of doing all this in a structured and organised way. Therefore I would say this has a technical difficulty of an 8 to 9 for beginners at least.

What inspired this image?

I'm always looking to be more creative in my photography but I'm certainly enjoying black and white photography as a genre at the moment. I really enjoy the work of the great Michael Kenna and love the architectural work of Joel Tjintjelaar and Ioannis Nikiforakis, so I guess I'm inspired by many different artists. But overall I get inspired most by the location and atmosphere I find myself in when on location.

When working at the coast beware of the tide and keep your bag well up the beach. Also wash your tripod off with fresh water on your return home as salt quickly ruins the best of tripods.

Thank you to Sophie and the team at Wex Photographic for this invite.