Decorating with Weather and Light

As a teacher of landscape photography, the most common question I receive from participants the days prior to an upcoming workshop is about the weather. Most are usually along the lines of "if it's pouring down I presume you will postpone the workshop?" (or words to that effect). Now, I have to say that it's certainly nicer to teach in glorious sunshine than when it's raining cats and dogs and yes, if the forecast looks like heavy gales and a total wash-out then I am likely to postpone - but mainly for reasons of safety. Otherwise, I adapt my choice of location depending on the latest weather forecast as I do when I go out to make my own images.

As I am about to head off for the Lake District to run a few workshops this topic is particularly poignant as weather plays a large part of running workshops in the Lakes - particularly in autumn and winter. A lot of consideration and forward planning is necessary so that whatever the weather, I have suitable locations already in mind. It's not quite a military exercise and it doesn't always go to plan but, in general, if you work with the weather and not against it, the likelyhood is you will find yourself able to make more successful images more often.

A case in point is a personal project I've been working on for the last 7 years or so. I haven't quite worked out a title for it yet, but I found a fascination with how certain trees - lone or within a copse or woodland, stand proud against their surroundings. Whilst working on this project, I became even more aware of how weather  and light plays an important role in the landscape - not just whether it's raining or not, but how that weather and light 'decorates' the backdrop to the image and/or how proud the actual tree(s) looks within the landscape in question. So I thought I would use some of my images from this project to demonstrate how understanding weather and light 'decorates' a landscape and how it has helped me develop my thoughts and ideas into a final image.

How it all started 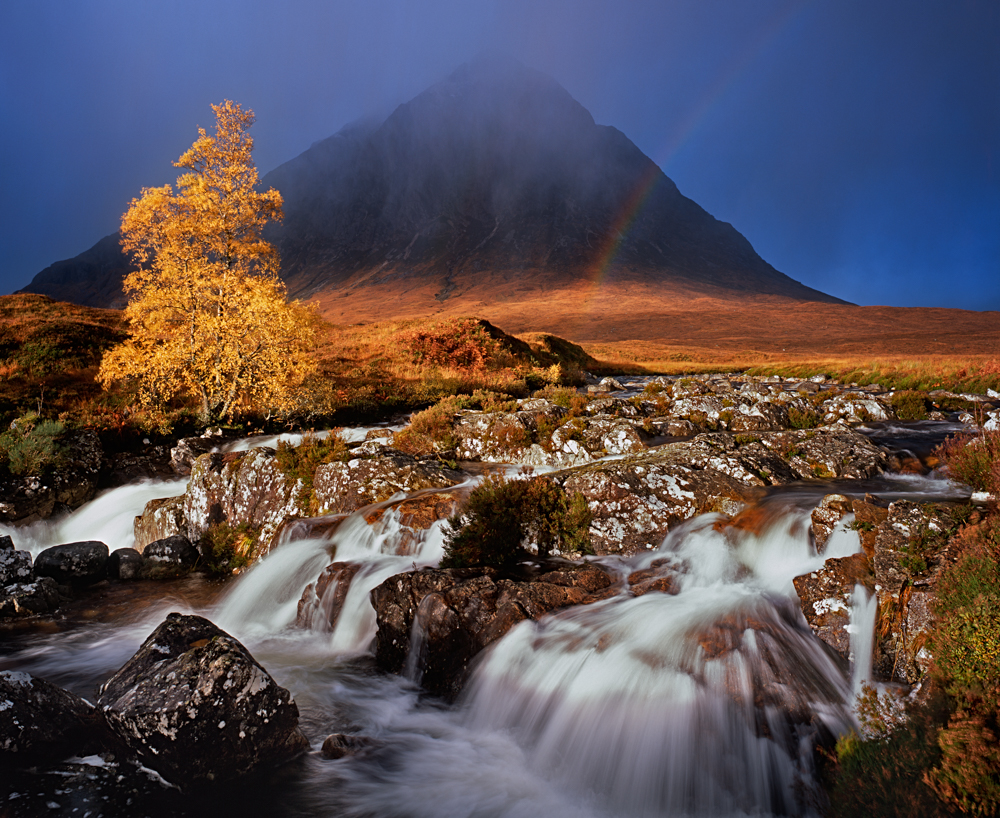 What started it all off was this image taken back in 2007 whilst I was getting to grips with my Ebony large format view camera. As is typical in Glen Coe, this was a day of rain, rain and more rain, but on the odd occassion there was a fleeting glance of light from the sun. For digital photographers, this would have been a relatively easy image to make but when trying to take light-metre readings when the light is so ephemeral was challenging indeed. Of course, this scene needs no introduction to most landscape photographers and I've seen many images before and after. But what I like about this image is how much more proud and pronounced the tree looks and how it brings the image together. However, the weather has 'decorated' its surroundings to make a more pleasing, and in this case, moody image.
So this got me thinking about how the landscape is 'decorated' by weather - whether it is the back-drop to the scene or within all or part of the overall image. 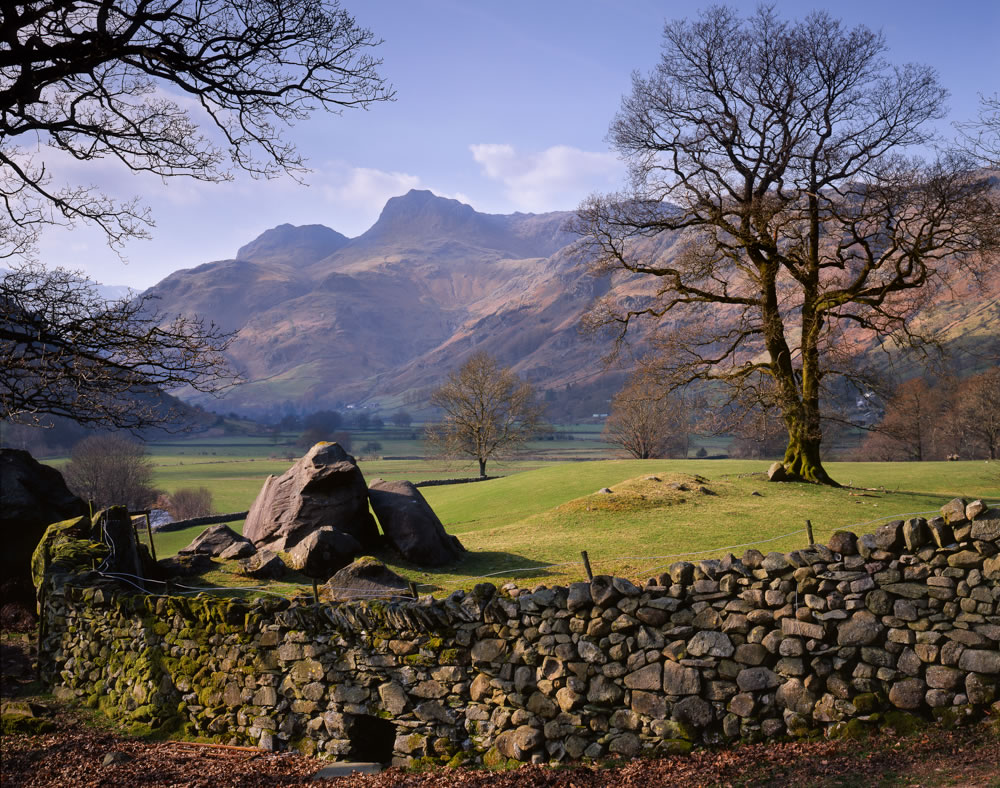 in 2009 I came across a similar image whilst scouting for locations around the Langdales area of the Lake District. On this particular occassion I was a passenger, which allowed me to keep an eye out for possible areas of interest. Whilst travelling along this particular road I came across this image of a beautifully proportioned tree in its skeletal form as it was early spring. It immediately hit me how proud it stood against its surroundings. We therefore parked up and took a closer look for a possible composition. In this case, it was a mainly clear but chilly day void of any breeze - perfect conditions to make an image using a View Camera!
What I love about this image is how the branches of the mostly unseen tree on the left have created complementary shadows against the dry-stone wall adding another level of interest. Again, an example of light helping to decorate an image.

Now, in both images I've shown so far, both were pretty opportunistic. That is, I just happened to be there when the light was just right. But what if I could make an image that was more considered with regard to the weather and light and how it plays its part?

This, for me, is when things started to slot into place. I began to recce locations and make notes of not only the best time of year to visit (which I already did anyway) but the type of weather most appropriate for the shot in mind. By doing this and making notes on my phone all I need to do is choose a location from my notes after consulting the weather forecast. I now use this method all the time as I find it generally a more efficient use of my time. Here is a few examples of images taken using this technique (and a short explanation of each). 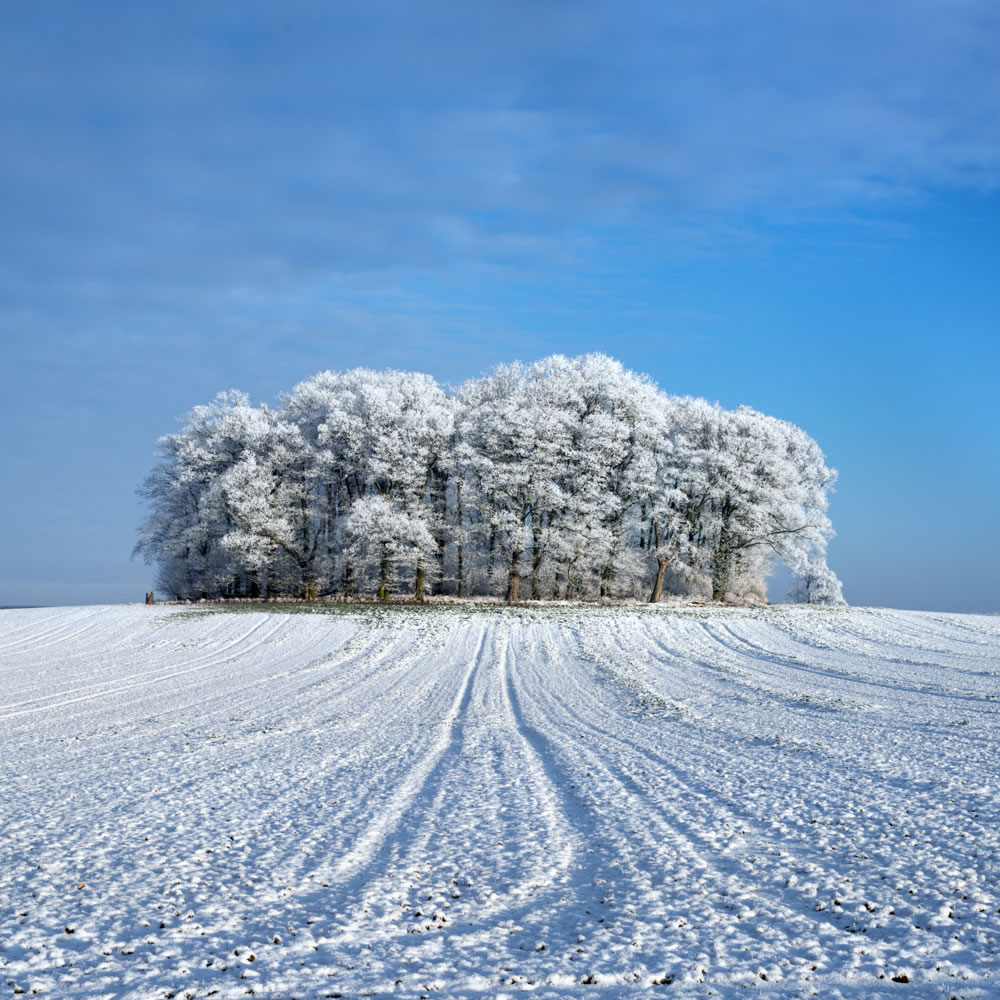 I have to confess that I noticed this small and perfectly formed copse from a black and white image of the great Michael Kenna on his website. However, I decided that I would prefer to make an image of it in hoar-frost. I therefore made a note to return when this was so. It was a couple of years later before I got the opportunity but I got the image I had in mind.

Snow or no snow? 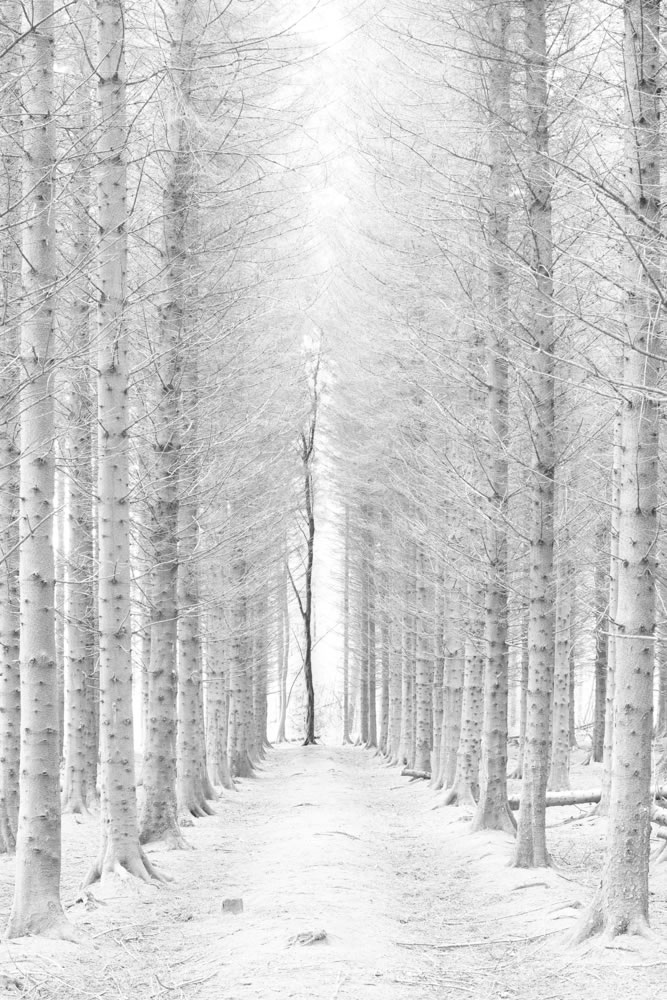 I found this location whilst running a one-to-one workshop with a client at a park near to where she lives. There was so much to explain on that day that it wasn't practical to make this image but I did make a note of the location and, more importantly, what the most suitable weather would be. I returned a few months later on a particularly overcast day to make this image. Although it could be mistaken for snow, it was infact taken in the month of September and is actually an over-exposed image, which I had a mind to emphasise the end tree in post-production and turn to black and white, which I did. It was important to choose an overcast day so that the light was diffused and even throughout the image. Although over-exposed it would have been a noticable distraction if there was harsh light from a high-pressure, blue-sky day flitting through this scene. 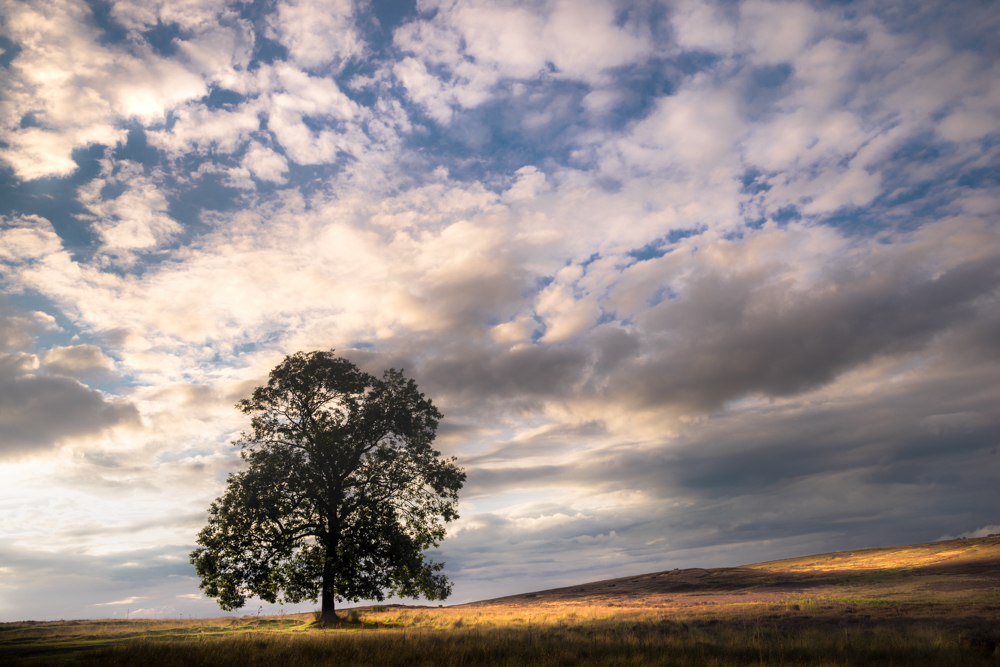 This image is one I've had in my notes for a good couple of years. I visit the area quite regularly but it was only this summer when all the elements came together to make a succesful image from it. This large oak tree stands tall and proud and although I knew what position I wanted to take a picture from, I knew it needed some decoration from the weather. It needed an interesting sky with well-textured clouds that dapple the foreground with light (the last part being very important as the surrounding moorland is generally rather bland and dull). A tall ask to say the least, which is why it took quite a few visits over those years before I eventually made this image I'm happy with a few months back. 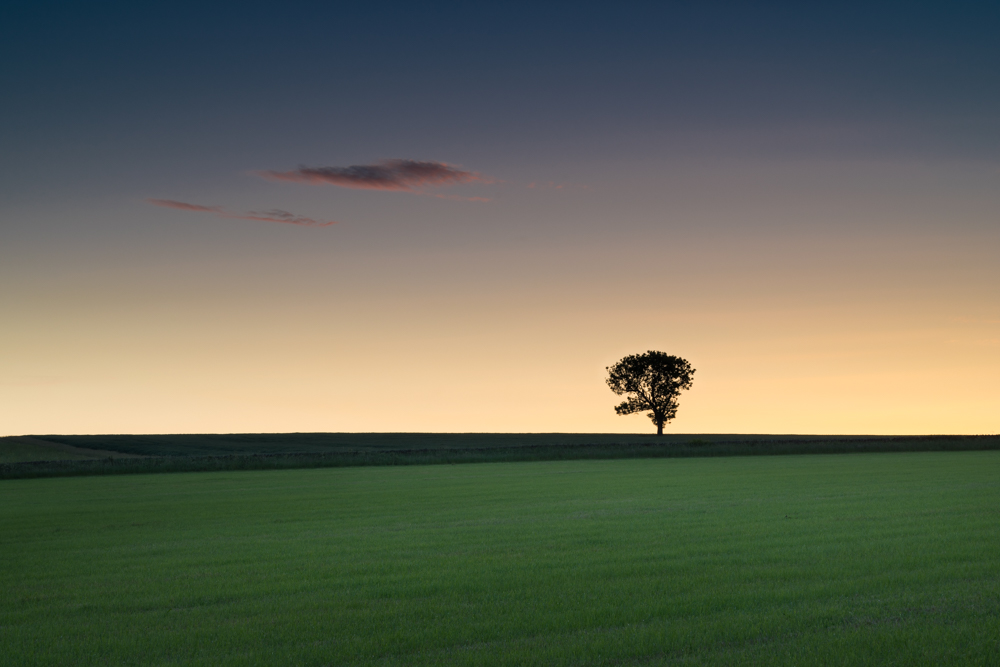 It was whilst walking with my wife one day that I stumbled across this image on the edge of the North York Moors. I remember we were just chatting when I looked up and did a double-take of this scene. Those moments are rare and so I knew it would be a successful image in my eyes. Again, making a note later on in the evening, I returned just twice over the next two weeks with camera. I already knew that to keep it simple I needed to visit on a high pressure, blue-sky evening with only a few clouds (if any) in the sky. In this case, I couldn't have placed the quickly dissipating cloud in a better area of the image but hopefully, this helps to demonstrate the appropriate use of weather and light for the image you have in mind.

Nearly, but no cigar! 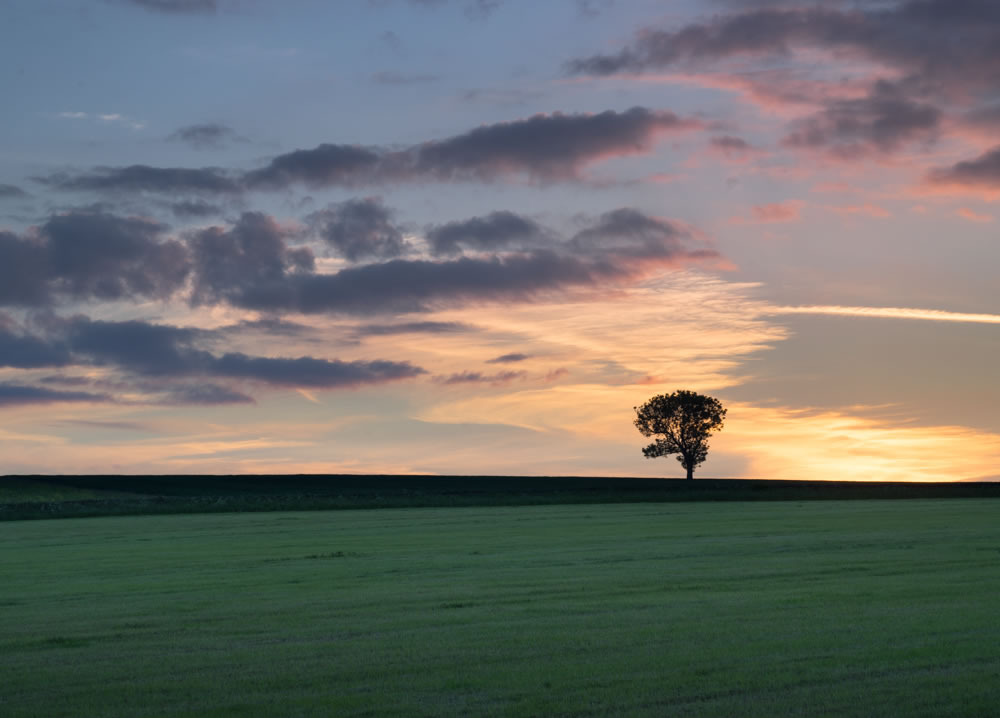 I thought it would also help to display this image from the same location on my previous visit. In this case, the forecast wasn't quite correct (surprise, surprise!) and so when I arrived there was still quite a lot of cloud in the sky, which to my mind, confuses and complicates the image. The main reason I took it was to reassure myself of composition and exact placement of the camera so that when I returned I knew exactly where I need to position the tripod. 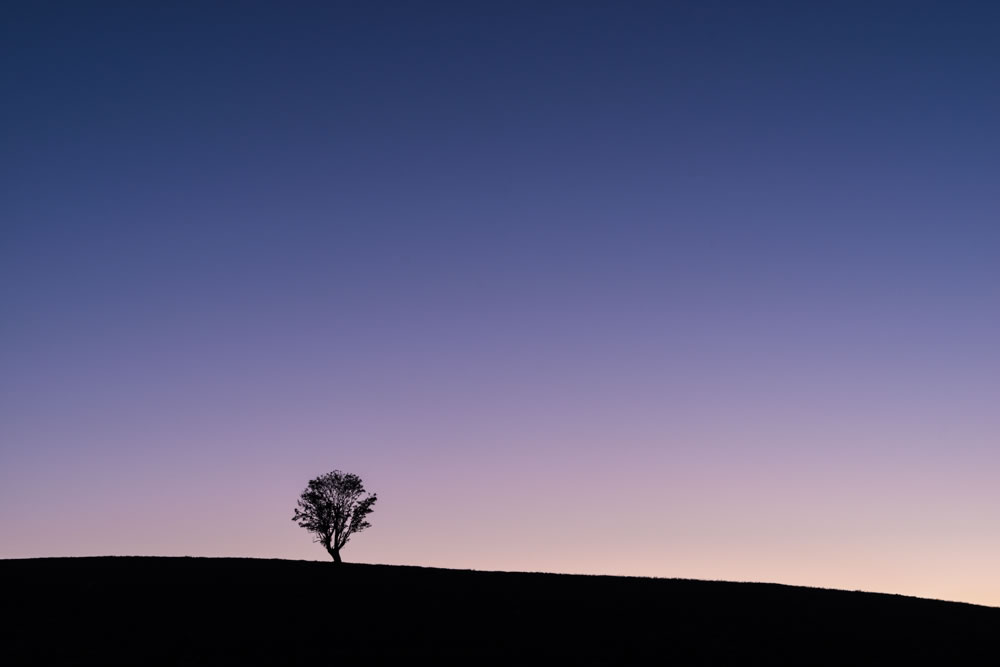 My final image is one I took just recently in beautiful Swaledale. Once again, it's an image I had in mind and had a note of from around three years ago. Similar to the previous image, I knew I needed to visit it when there was little or no clouds present, to keep it simple and to show off the silhouetted tree's delicate form against a rather colourful back-drop of graduated hues of colour. Armed with all this prior knowledge, I set off around 4 pm in the afternoon in late September to arrive around an hour before I knew the light would be about right and set up ready. It was then just a case of waiting for the right moment of hues and bingo - I was on my way home a happy bunny!

To conclude then, I have found it immensely useful planning locations to visit around the weather and not just time of year. In general I also find it a more efficient use of my time too, which is a bonus! So if you don't already do this, why not give it a try and let me know if it works for you too? I can be found on facebook or twitter and look forward to hearing your thoughts on the subject.  :)