I recently had chance to visit a lavender farm near Terrington, York a few weeks ago and I have to say I thoroughly enjoyed experimenting with the new Lumix G3 camera I’d borrowed. It was the ideal camera for getting in among all the lavender and other brightly coloured flowers to make a few pics. However, it was a tad blustery and along with no cloud cover I knew it would be rather difficult to make anything decent here. 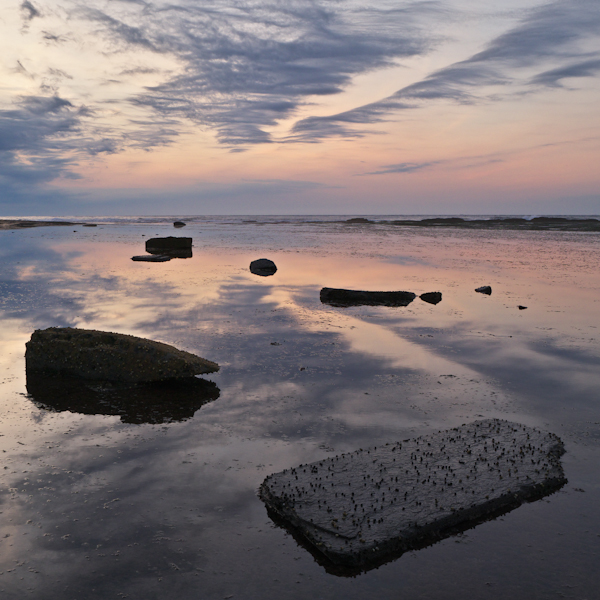 After a good few hours and a rather nice coffee I decided to head for the coast as the evening forecast for anywhere else was dull and overcast. Whitby felt like a good idea but having recently visited there I knew any images from or of the piers risked a huge crane in the way (I believe they’re repairing East Pier lighthouse?).

I decided therefore to take a look around Saltwick Bay. I don’t normally go here much now due to its over popularity with photographers but I thought I’d give it a shot as I mainly wanted to put the G3 through its paces.

I was pleased to find that the path down to the shore has had extensive repairs carried out recently and is in much better order than when I last visited – it was getting a bit dodgy with a heavy backpack (they’ve even removed the danger barrier at the top!).

The tide was well out and I decided to take a left for a change and work along the shore mainly looking for close-up opportunities. I couldn’t help noticing a very large expanse of shallow water with erratics laid about though. This would normally have appealed straight away but I was a bit hesitant to wade in the 60 yards or so knowing that one false move would end up with the borrowed G3 in the salty brine. However, I just couldn’t resist and took it very steadily as it was quite slippery – one leg down on the tripod works well in these circumstances! (Oh and wellingtons of course! ;)).

Finding a handy rock to perch the camera bag on I wandered around with the trusty Linhof finder. Unlike the Lumix G1 that I own, I found the G3 has a useful 1:1 aspect ratio (a ratio I’m becoming rather fond of to be honest) and I eventually came across an image that I thought would suit this ratio well. I also noticed that the lines of the clouds were quickly working their way into a useful pattern working rather like a lead in line. I had to work quickly though and the G3 didn’t disappoint in this regard. Panasonic have pretty much kept all the dials in the same place as my G1 so I quickly worked out where all the necessary features were placed to make sure I got the image ‘in the bag’.

I don’t know whether it’s just me, but one thing I detest on the new G range of cameras is the touch-screen. I applaud new technology when it produces a real benefit to the user but I’m afraid in this case I just find the touch screens complicated, fiddly, frustrating and, well, gimicky. Fortunately they have at least left the dials on the G3 as an alternative but I wouldn’t give twopence for the GF3 they’ve recently launched. Bring back the dial, Panasonic!!

Anyway, off my orange box!

After making a couple of images I noticed, rather like the G1, I got the better result from the image I under-exposed by a third of a stop (funny that?).

As usual, this image and more can be found in the Seascapes section of the website – enjoy!