I came across today’s image back in June. John and I decided to have a wander into Wensleydale for the day to seek out new opportunities (aren’t we always doing that?!). We headed for Bainbridge first and then our idea was to pan out from there, studying the OS Map and generally getting to know the area more photographically. Stopping off for coffee at the local cafe, we planned our day to recce the area around Little Moss just North West of Bainbridge itself and then to check out Semer Water to the South. 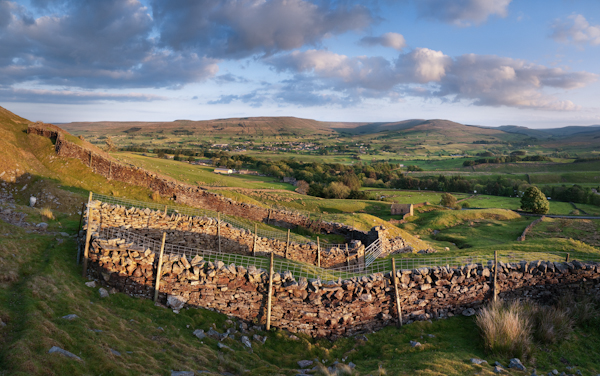 We were optimistic that the weather was going to be a little kinder than of late. We’re not always looking for fluffy white clouds – far from it, but of late we’d been dealt a few grey, dull days with no features in the sky at all (not even for a monochrome image!). So we’d been resigned to woodland and close-up work. Today looked promising.

Arriving at Little Moss, John decided he would like to make an image from the top of the ridge using some conveniently located stone mounds as foreground. I found this image further down the escarpment which I noticed from the top. I find the foreground stone wall fascinating as it backs round on itself before bridging a small water channel emanating from a spring further up the embankment. I just wonder why the decision to make the wall this way was made (just curious that’s all – I’m sure there’s a logical answer!).

After studying the scene for a while I decided a panorama would be the best course of action. In particular, I needed to make sure that there was at least a small gap in between the returning wall.

At this point, we both knew which images we were going to make. However, it was only around 2 O’clock. So we made a bee-line to Semer Water and have a look there. Again we found images we both liked but felt it would be better to return in Autumn for the extra colour the trees would afford (whether I get the time this autumn is another matter).

After having an early evening meal at the Rose & Crown in Bainbridge, we set off back to Little Moss. As is sometimes the case, by now the clouds were starting to dissipate leaving large empty voids of blue sky. Fortunately, and for a change, the blue sky was behind our scene allowing the sun to work its magic throwing long shadows across the scene.

Setting up the tripod absolutely level (a must for making panoramic images), I set the Pana G1 to cloudy white balance and made around 5 separate images in portrait mode with plenty of overlap on each image.

A slap and a tickle in Photoshop to meld them together and bob’s your uncle! A little bucolic for some I’m sure, but I’m pleased with the result personally.

As usual, this image and more can be found in the Landscapes section of the website – enjoy!